We use cookies on our website. They help us get to know you a little and how you use our website. This helps us provide a more valuable and tailored experience for you and others.

You can revoke cookies at anytime at the bottom of the page.

The Crystal Ship also continues to push back boundaries. Previously the organisers announced that they created a limited edition gym bag with the artist Sammy Slabbinck. This can be purchased from the following Ostend shops: Hulpiau, Deweert Sport, Bravo, B&M Optiek, #GinoBoutique, Lily and Vitrine Lulu Store. Various Ostend pubs and cafés will also be using beer cards featuring works of the previous years. “The Crystal Ship is now a well-established event in Ostend, which is why it is so important to involve Ostend entrepreneurs in this story. The idea is to introduce visitors to this unique festival, building a bridge to local entrepreneurs”, says Mayor Johan Vande Lanotte.

A new event this year is “The Crystal Expo: Andromeda is not away”, in collaboration with the Vroom & Varossieau gallery and Catawiki at Expo 18 (IJzerstraat 18). A dozen artists will exhibit smaller works in this location, which will be sold to raise funds for charity. “We will be exhibiting works by D*Face, Risk, Blade and L’Atlas & Tanc, which is a great way of bringing art by internationally-acclaimed contemporary artists to the city”, says curator Bjørn Van Poucke.

The Crystal Ship’s horizon is also expanding with the participation of Johannes Verschaeve, who is originally from Ostend. With his “The Peep Hole” project, he wants to give visitors a peek at Ostend family scenes.

All the works will be officially presented at the festive opening event on Saturday 7 April at 2.30 p.m. in Langestraat and Monacoplein. The Crystal Ship has partnered with the Instant Karma Festival, so visitors can enjoy several performances, including by Brihang. The Flemish radio channel Studio Brussel will also broadcast live from Monacoplein.

This Ghent artist, who was born in Boston (US) but raised in Belgium, is at the forefront of the Belgian street art scene. His work is often autobiographical, although you cannot always tell at first glance. He likes to weave a narrative with his paintings, drawings and murals, inspired by such themes as the living and the dead, society, comic strips, media and nostalgia. You can see his work in Belgium, Canada and the United States. He has created several works for the rotating Wynwood Walls project in Miami.

Ben Slow lives and works in London and is known for his eye-catching black and white portraits. He is inspired by the city’s liveliness and the mix of subcultures and the colourful people he meets on his travels.

His work focuses on people who have an impact on the local community.

Dourone is an artist with a very personal and therefore very recognisable style. He has always been passionate about drawing, ever since his childhood. During his teen years, he discovered the adrenaline, the freedom and the sense of community and brotherhood of the street art scene.

His often dreamy works combine symbols and images of our existence. It is difficult to define Dourone’s style.  He says he wants to mainly convey values such as freedom, respect and diversity.

Colectivo Licuado, from Montevideo in Uruguay, was founded five years ago. Its members are Camilo Núñez and Florencia Durán. Their motive is to add colour to public and private spaces. They examine and combine culture with the traditions of the environment in which they are working, in their own unique style. You can find their works in Croatia, Germany, India, Colombia, Uruguay...

Etam Cru are Bezt and Sainer. They collaborate to create large, colourful, surreal murals, which succeed in convincing even the biggest sceptics about the merits of street art. Their work is teeming with Eastern European mysticism and symbols of folklore, as well as humour and sarcasm. You can see their work around the world.

Gaia was raised in New York City. His murals have been featured in various books, including in “Beyond the Street”. Gaia has worked on all four continents. He is mainly interested in people who define the society we live in and in the refugee crisis. His works contain plenty of social and political references as a result.

Joachim is a young, productive and extremely talented artist from Lier. You cannot fail to notice his striking graffiti pop-art style. He is known for his childish spontaneity and likes to experiment with a wide range of styles. Joachim likes both street art and studio work. He has carved out quite a niche for himself on the international arts scene with several murals, sold-out prints and exhibitions all over Europe.

Matthew Dawn studied Digital Arts and Entertainment at Howest and has since become a renowned artist in Belgium. He was introduced to street art by friends and has become a fixture on the scene with his street art workshops. Matthew Dawn uses brushes or aerosols to chart his course through a creative comic strip world of colourful characters and portraits, often conveying a more serious message in his works.

Milu Correch is known for her endless imagination, which she uses to create a world without boundaries or written codes. She became fascinated by large murals after seeing a work in her native Buenos Aires. She followed a workshop, creating her first large work, a collab with friends, in 2011. She is inspired by literature, film, strips and sometimes even by herself...

Wasp Elder is a socially engaged artist who uses his artworks to communicate with people. His paintings combine lonely figures, collages and hidden elements. He wants to show us how we process the information around us. He has collaborated on projects around the world and uses his experiences to learn about people, locations and their environment.

Telmo & Miel’s artworks are realistic, humoristic, colourful, moving and playful. Telmo & Miel are two creatives, Telmo Pieper and Miel Krutzmann. They each have their own style, adding special touch to their works. Spectators are encouraged to use their fantasy to understand their works.

Zoer (Frédéric) is Italian, Velvet (Matthieu) is French. They met while studying industrial design. Their work is the result of their photographic memory,  which feeds their inspiration for figures, objects and letters. They like to mix various disciplines but always start from the environment in which they work. Zoer and Velvet are already at work on their mural on the side façade of De Spui sports hall, which refers to the stands inside.

He is probably better known as the lead singer of the rock band “The Van Jets”, which hails from Ostend. This is his first foray in a new art form. He hopes to create other work, in addition to music.

Icy & Sot are two brothers from Iran, who are currently living in Brooklyn. Since 2006, they have contributed to Iranian and international urban art and culture with their stencils, interventions, murals and videos. They mainly focus on such themes as human rights, capitalism, ecology and social and political issues. You can see their work in Iran, the US, Germany, China, Norway...

If you are invited to The Crystal Ship for the third year running, then you’ve definitely become a fixture. As a garbage man, Jaune soon realised that he blended in with the anonymous city, in spite of his hi-vis outfit. Now his garbage men twirl through the city in humoristic and absurd settings, with Jaune taking aim at the society we live in.

After his participation in the first iteration of The Crystal Ship, Jaune got his international breakthrough. You can now see his work all over Europe and the United States.

The world is OAKOAK’s playground. He uses elements from the surrounding environment or existing defects, such as a crack in the road surface, adding a drawing and making passers-by smile when they spot his interventions. Prepare to be surprised as you walk around Ostend.

You can also book a special The Crystal Ship package through the website of the Ostend tourist office (www.visitoostende.be). In addition to a night in an Ostend hotel, you also receive a unique set of The Crystal Ship postcards. Naturally you will also find an information kit about The Crystal Ship in your room, so you can easily navigate the arts trail. 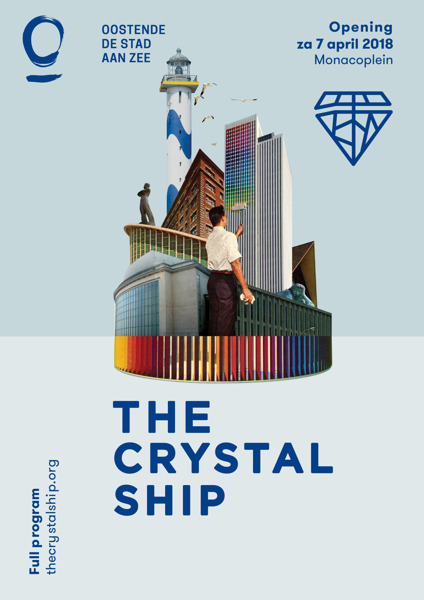