We use cookies on our website. They help us get to know you a little and how you use our website. This helps us provide a more valuable and tailored experience for you and others.

You can revoke cookies at anytime at the bottom of the page.

The Raft. Art is (not) lonely was officially inaugurated on Saturday 21 October at 7.30 p.m., with the performance A beautiful match between artists and curators on KV Oostende’s pitch in the Versluys Arena. The international artists and curators were Hans van Houwelingen, Katie O'Hagan, Kris Martin, Alberto Garruti and many more.  Everyone was welcome from 6.45 p.m. in the Versluys Arena (Leopold Van Tyghemlaan 62, 8400 Ostend)

Het Vlot. Kunst is (niet) eenzaam / The Raft. Art is (not) Lonely

The exhibition dramaturgy begins in Mu.ZEE with an in-depth exploration of The Raft of the Medusa (1818) by Théodore Géricault and Jan Fabre’s utopian raft, Art is (not) Lonely (1986). Unmistakably separated in time by 170 years, and created in completely different circumstances, the works are nevertheless linked through their depiction of the expedition and destiny of the artist, a theme which also serves as a metaphor for the condition humaine [man’s fate].

Jan Fabre’s utopian raft as well as the studies preceding Le radeau de la Méduse (The Medusa’s Raft) by Théodore Géricault will be on display during the exhibition; they served as the conceptual models with which the participating artists established a connection.  A raft is a vehicle, a lifesaving device, a place of isolation, reflection, uncertainty, insight and coming together. It symbolises a journey with a clear destination or an adventurous quest lacking direction. A raft can be understood as a symbol for manifold interpretations. You can also call it a metaphor for the ecstasy that art can instil.

A storm, a shipwreck, a raft at sea. A handful of survivors cling to life. They want to survive. This theatrical and semi-romantic image inspired many eighteenth and nineteenth century artists. Turner lashed himself to the mast of a sailing ship to gain first-hand experience of the savagery of ocean storms. He translated his impressions directly into his work. Théodore Géricault was profoundly shocked by the wreck of the Medusa, a French frigate that sank in 1816, and he immortalised the few survivors clinging to their raft in numerous pencil sketches and a large oil painting. Loneliness, fear and despair, the will to survive, to live and therefore, if necessary, to take another life ... these gruesome aspects lead us through the history of the nineteenth and twentieth centuries to current events. Many artists have imagined themselves upon that raft and endeavoured to appropriate the distress and hardship, and translate it into a work. It is not only the tragedy that is inextricably linked to this theme, but also the sense of adventure. The explorer who sets off in curiosity!

The Raft of the Medusa caused an intellectual and emotional furore when it was first exhibited by Théodore Géricault. The sophisticated composition, in which he focused on the human drama and the changing status of the artist, remains etched in the memory as a sharp indictment of the royal family and a hidden reproach of slavery. That the work should provoke such a violent reaction is hardly surprising, since it was the first time that an artist had so explicitly capitalised upon a topical theme. Questioning the establishment was simply not done. But what, specifically, was the artistic dimension that became overshadowed by the socio-political angle? Géricault’s raft represents the desolation of the artist after the Ancien Régime, who found himself cast adrift, as it were, due to the gradual disappearance of the traditional patrons. That many generations have perceived the ‘total creative freedom’ that ensued as both a threat and a gift.
The artist, no matter how alone he might feel on his journey, is not lonely. It is double-edged sword: on the one hand, the artist needs solitude and introspection to provide direction; on the other hand, the artist’s raft is propelled by the desire for connection and spectacle. These ever-shifting moods, which veer between hope and despair, promise and oppression, vision and blindness, illusion and reality, can be shared through art. The title of a conceptual model from the 1980s, Art is (not) Lonely is a miniature world that conveys Jan Fabre’s vision of the artist. His raft has been kitted out with a gymnasium, athletics track and football pitch: a sorrow shared is a sorrow halved. He refers to the endurance of hope in the face of catastrophe. Art and communication as the forces that drive us towards a promising destination.

Jan Fabre and Joanna De Vos asked a number of contemporary artists to give their own interpretation of the theme of the raft, within this thematic framework and the dramatic composition of this exhibition.  In the panorama of the North Sea and at all layers of the fabric of the city 73 artists share their creations. Their work often bears witness to a dichotomy, in which quiet isolation and social engagement are equally important.  The staging of the exhibition is intent on challenging boundaries. Some of the visual artists are also engaged in other disciplines, such as film, theatre and performance art. Existing work, as well as 52 new creations, will be on display at 22 familiar and surprising locations. Additionally, at least fifteen artists will be presenting a unique performance. Art is the medium for communication; art demands and creates connection. Art is lonely, yet is not. The urge to communicate and exchange ideas and opinions is expressed immediately in performance art. The physical body is used as a raft of experimentation and transition, to which the audience is both witness and participant.  The City of Ostend will become a large, hospitable raft of art during the Triennial. It offers its body and soul to look beyond the familiar framework, because it is precisely in this that the foundation of discovery and rediscovery lies ensconced. Art must disturb and enchant.

Het Vlot/The Raft: the raft as a monument, the raft as a corps, a utopian model, a legacy of manual production and the trace of a physical process, the concept of experiment and expedition, the historical/current, poetic, social, political, national or international relevance of the raft... 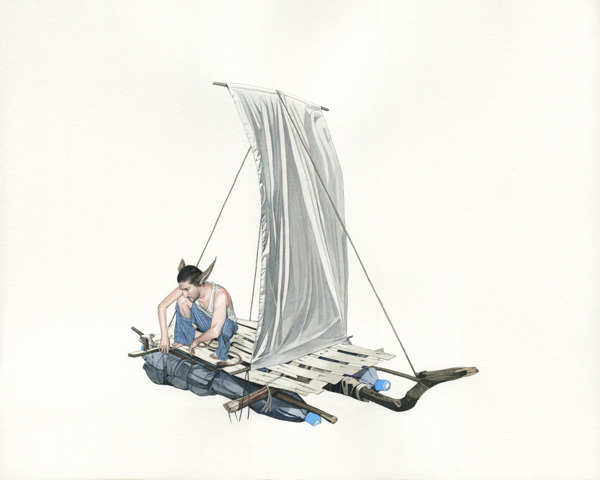